Adopting Harry 1: A search for cultural roots inspires an adoption

While Kate and Justin Russell started their search for adoption agencies in early 2019, their plans to adopt two-year-old Harry from South Korea began long before — about 15 years ago. 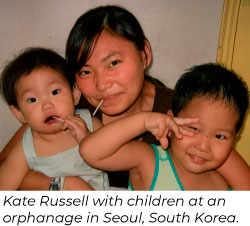 Kate was a 20-year-old sophomore at Colby college when she heard about a grant awarded to students who were proposing an international research project or internship. She saw this as her opportunity to travel and learn more about her birth country — South Korea — where she had been adopted at four months old. Keeping her family’s adoption history in mind — her adoptive mother is also an adoptee — Kate wrote a proposal expressing her interest in working with orphaned children in Seoul. When the grant committee accepted her proposal, Kate began her journey to South Korea.

Originally thinking that her goal was to simply immerse herself in South Korean culture, she was surprised when the orphanage director in Seoul asked her if she wanted to find her birth mother. Her adoptive family was so loving and wonderful that the idea of searching for her birth mother hadn’t crossed her mind. As she learned more about the cultural, social, political, and emotional values behind the South Korean adoption system, she wondered if she should be more curious. 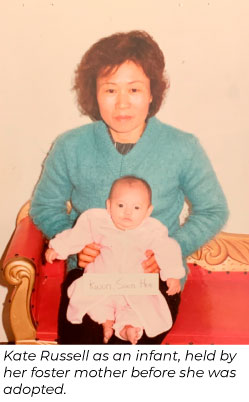 Kate discovered that single, unwedded mothers in Korea were harshly stigmatized. They were often socially isolated from their communities, rejected by their families, and did not receive government aid. Many of these mothers had no choice but to relinquish their children, and they often did so anonymously. According to Korean law at that time, birth parents needed to sign away their child in order for an adoption to occur. Kate realized that many of the children she worked with at the orphanage were given up anonymously — trapped in the system. Since their birth parents didn’t give permission for adoption, these children may never experience what having a family is like.

And so, Kate began searching, not to ask her birth mother questions about the adoption, but to say thank you. “I wanted to let her know that I was OK and that I was really proud of her for being so brave in consenting to my adoption,” Kate told staff at the Maine Children’s Home.

When Kate was adopted, adoption files were not very comprehensive. She knew only her birth name and her birth date. But with that information, she and the orphanage director were able to find the orphanage from which Kate had been adopted. She discovered that her mother had signed Kate away, wishing for Kate to be adopted by “a good American family”. She also learned that her mother had been only 15 years old at the time — information that changed Kate’s mind.

At that time, I decided to not reach out to my birth mother. I realized that she was 35. She probably had other children, and she was probably married. For me to go in and disrupt the life that she had built … By not finding her, I felt as if I was protecting her the way that she had protected me,” said Kate. “And so, what I decide was that I wanted to adopt.” 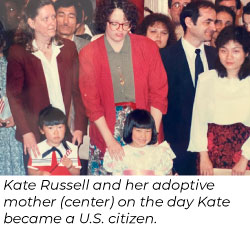 Kate always felt as if she belonged while growing up in her family. “I never felt as if I wasn’t a part of the family. For that reason, I kind of took my adoption for granted. But having been to Korea, experiencing what orphans there go through and what the adoption system is like … It just made me incredibly grateful for my birth mother and incredibly grateful for the life that my adoptive family was able to provide for me,” said Kate.

Today, Kate says her gratefulness is the reason why she and Justin decided to move forward with an adoption. They wanted to provide another South Korean child the same opportunity that Kate was given by her birth mother and adoptive family. “We had talked about it before we were married, and always planned to have two biological children and adopt our third,” said Kate.

Despite the pandemic in 2020, Kate and Justin were able to finalize the adoption of 2-year-old Harry from the same orphanage Kate had been adopted from years ago.

In a future post, we will tell the story of the Russell’s adoption journey during a global pandemic. 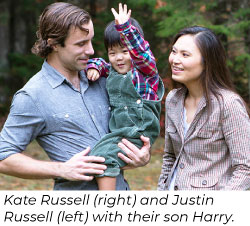 If you were moved by this story, please consider making a donation to The Red Stocking Fund of the Maine Children’s Home today. Hundreds of Maine families benefit from the essential services the Maine Children’s Home provides — counseling, adoption, teen parent education and support, parent training and mentoring, summer camp resources, and the Christmas Program. In the year of COVID-19, the demand for home support has been more urgent than ever.

Thank you for supporting the Maine Children’s Home, and serving the love, the meaningful connection, and the stability that ALL children and families need and deserve.